Sydney based curator and arts writer.

Each February, Cicada Press brings together Indigenous artists from diverse parts of the country to participate in the annual Indigenous print workshop. For two weeks, a small group of early and mid-career Indigenous artists share a studio at the University of New South Wales Art & Design to experiment and create through a new medium. Run by Tess Allas, Director of Indigenous Programs and Michael Kempson, Convenor of Printmaking Studies and Director of Cicada Press, the workshop is a space where stories are told by some of Australia’s most exciting Indigenous artists. The resulting works are bold and thought-provoking insights into contemporary voices in Australian art.

Historically, the study of Indigenous art practice has been through the lens of anthropology. As Indigenous Australian art historical discourses have slowly but increasingly become part of contemporary art discourses, so too has the diversity and plurality of their scope. This diversity was sought through Storylines, a large-scale research project undertaken by Allas, Professor Vivian Johnson and Laura Fisher in conjunction with Design & Art Australia Online, and a precursor to the annual Indigenous print workshop. Supported by a three year (2007-9) Australian Research Council Discovery grant supplemented by UNSW Art & Design, Storylines examined and documented Indigenous art making outside of ‘remote’ Aboriginal Australia. This covered regions in New South Wales, ACT, Victoria, Tasmania, the southern parts of Western Australia and South Australia as well as the eastern regions of Queensland, which lie south and east of the so-called Rowley Line; this referred to the invisible line existing across the map of Australia that was theorised by sociologist C. D. Rowley as dividing Aboriginal people into two distinct binary groups, ‘settled’ and ‘colonial’. 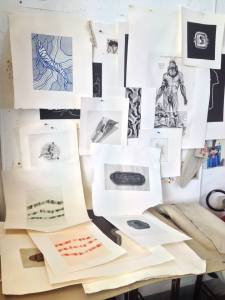 Of the Storylines research findings, Tess recounts, “we found that many artists from below the ‘Rowley Line’ were not seriously considered, written about, curated into shows or collected, nor did they seem to have the same access to art workshops, studios, equipment or the actual ‘artworld’ as those who are based in art centres above the Line.” With the aim of enabling Indigenous artists access to studio spaces within the University, Allas and Kempson, who Tess says “has been one of the very few people who have helped to address this imbalance by opening his studio to as many artists as possible,” formally established an annual residency program through Cicada Press in 2012. The result was a program that removed Indigenous printmaking from the confines of north Australia and allowed a diversity of Indigenous artists to test new ideas, participate in new conversations and produce new work in printmaking. To date, Cicada Press, through the programs organised by Allas and Kempson, has hosted residencies for such artists as Tony Albert, Fiona Foley, Vernon Ah Kee, Brenda Croft, Gordon Hookey, Reko Rennie, Dale Harding, Laurel Nannup, Brett Nannup, Ryan Presley, Jason Wing and Frances Belle Parker. 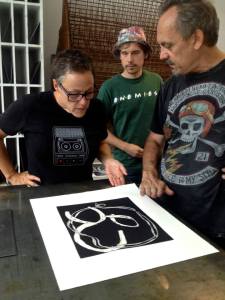 An educationally based custom printmaking workshop founded in 2004, Cicada Press functions as a space where professional artists are invited to produce a body of work with the support of Kempson and UNSW students. Often, the artists will be new to the medium as well as the experience of participating in a university residency. “As a rule we like to invite artists who generally have no experience with printmaking,” Kempson says. “We think it is important that residencies are offered to artists who might never get the opportunity to encounter art making in a university context.” Tess adds that what the workshop also seeks to nurture is “a space where [artists] can be artistically challenged and learn new skills.” The result is a space that combines traditional pedagogy and an academic studio setting with the teachings of those with personal and lived experiences

A recent participant in the workshop is Sydney-based artist Tony Albert, who is of Girramay, Yidinji and Kuku-Yalanji descent. Following the year in which he was a recipient of the National Aboriginal & Torres Strait Islander Art Award and the Basil Sellers Art Prize, Albert was invited to participate in the 2015 workshop. For Albert, it was an opportunity to explore a new medium and develop his artistic practice. “The idea of not being stagnant and continuing to challenge your own technical practice is important,” he says, “how I think and feel is to push my practice.” Albert, whose body of work has included working in mixed media installations and photography, often uses his work to interrogate the legacies of colonial histories, focusing on representations of Aboriginality. A distinct characteristic of his practice involves recycling what he calls “Aboriginalia”, kitsch objects that naively depict Aboriginal people. Translating his aesthetic and conceptual concerns to a two-dimensional medium, Albert produced the Ashtray series, a series of etchings based on the vintage ashtrays depicting Aboriginal people, which today can be seen as powerfully symbolic objects. The resulting works are challenging reminders of the ways in which Aboriginal people have been historically portrayed in Australian society, evoking inquiry around prevailing racist attitudes in contemporary Australia.

One of Tony Albert’s ashtrays

The 2015 Indigenous print workshop saw the Adelaide-based early-career artist Raymond Zada, who is of Barkindji descent, create a series of prints using digitally derived motifs. One of these was the work, Rowley’s Line, which borrowed from the text in C. D. Rowley’s, ‘The Destruction of Aboriginal Society’ (1970) – the story that influenced the workshop. A work consisting of text and dotted lines over a strategically made black and white background, Zada’s work explores Rowley’s seemingly outdated logic and its applicability to existing paradigms surrounding Indigenous cultural identity. Zada’s practice has involved using mediums such as new media, photography, video and digital design to express the stories of displaced Aboriginal people. In 2012, he won the work-on-paper prize at the Telstra National Aboriginal and Torres Strait Islander Art Award. For the artist, participating in a collaborative studio environment was a new experience, “I had never produced art in the presence of anyone else,” recalls Zada, “[m]y practice always involved me working alone and nobody would see works in progress; so it was daunting having people see me work through ideas, which often just involves me staring at a computer screen.” He concluded, however, that the workshop was important, as it provided a “safe and supportive space for artists to step out of their comfort zone and try new things.” 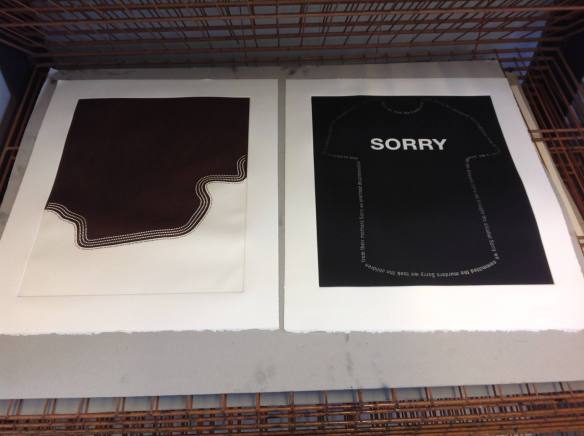 Another artist who has participated in the workshop is Dale Harding, a Brisbane-based artist of Bidjara, Ghungalu and Garingbal descent. Harding’s practice often involves investigating the social and political realities experienced by members of his family who lived under government control in Queensland. Re-telling the stories of his family, Harding’s prints Bright Eyed Little Dormatory Girls, Sack 1, 2 & 3 are a reminder of Australia’s untold histories from a perspective of lived experience. For the artist, participating in the workshop to realise the works was experience built on exchange and understanding. He says, “collaborating with Michael and Tess to translate some of my works into etchings was entirely like a great conversation between friends in a mutual second language.” Since participating in the workshop, Harding’s prints, like those of Albert’s and Zada’s, have featured in Cicada Press’ international and national touring exhibitions. 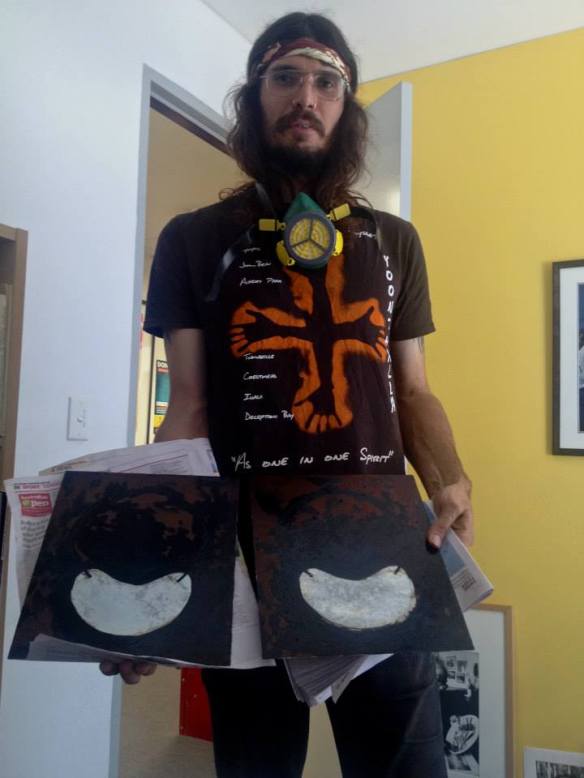 Dale Harding working on some etchings

Dale Harding’s proofs on the wall

In an artistic climate where printmaking continues to be an underrepresented medium in contexts for contemporary art, Cicada Press’ Aboriginal print workshop offers a positive story; one in which contemporary artists are engaging and experimenting with the formal and conceptual potential of printmaking practices. In the context of tertiary institutions, in which a significant portion of research and activity takes place for professional and practicing artists, Cicada Press’ residency program gives way to a thriving university-based printmaking community. This could be seen as offering something of a contrast to the decreasing interest and demand for printmaking programs elsewhere that have seen entire printmaking programs removed from the curriculums of several significant universities throughout Australia. Cicada Press succeeds in rupturing the insularity of an academic environment, bringing in new voices and perspectives and presenting them to international and national audiences through its touring exhibition. For its Indigenous artists, this is an important aspect of what it does, as Albert says, “the workshops are important . . . we now have these previously untold stories traveling around the world.”

Since their establishment, the workshop has produced something of a development in Indigenous art. It has seen a variety of Indigenous artists inject new voices and perspectives into an often-unexplored medium, becoming part of the ongoing history of printmaking in Australia. Most importantly, it offers an active space for the development of diverse and new voices in Indigenous art practice, as Allas says, “it is providing an opportunity for people to see there are stories to tell below the Rowley Line.”